June 28th was  Zooma NV Half.  The race weekend started off Thursday night with a quick trip to Athleta in SF where I helped out with packet pickup and met some of the Zooma staff.  Friday I crawled in traffic out to the Napa Valley Marriott to hit up the expo, meet some of the Zooma ambassadors and drop off a friends race bib.  I would have liked to stay for the Honest Tea Mocktail party but it was my Grandma's birthday dinner in Sonoma so duty called.

Saturday morning (more races need to be on Saturday), I was up 4:30 am and did the standard morning race day routine.  I was nervous about parking so I got to the race start by 6:30 (for an 8am start) and was one of the first ones there.  I had front row parking, no lines for the bathrooms or gear check.  It was very surreal.  I've never had a race all to myself before.  The volunteers and I had a great ole time sitting in the sun and waiting for the shuttles of runners to show up.  When they did, I met up with some of the other ambassadors to do what bloggers do best, take pics: 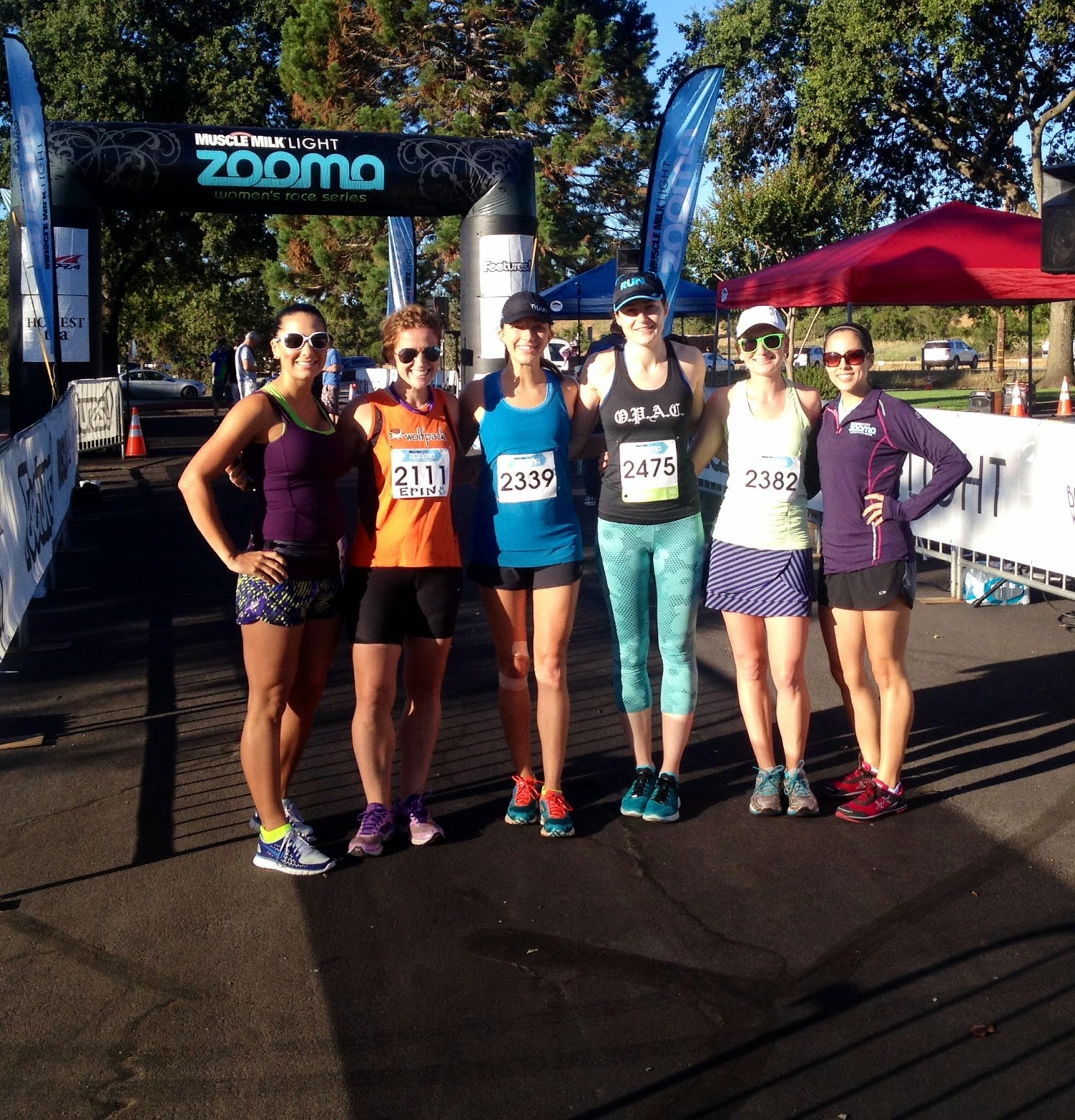 Spending time with these ladies was the highlight of this race and opportunity.  Yes, even better then all the swag and product we got.  Zooma did a great job picking some fun, inspiring and impressive women runners to represent this race.  It also doubled for a ReNUNNion with two of my Hood To Coast teammates from last year, Kim & Karen.  Even though I spent most of the day with Kim, I don't have a single picture of the two of us.  Blogger fail!

I did some light stretching (what? maybe I am growing up) and lined up to start.  At this point I was already warm and pretty nervous about the rising temp since my training runs have been in the 50's and foggy.  June gloom in SF is not a joke people.

At 8am sharp we were off.  I made some snarky comment about how I thought the race course might be in neighborhoods similar to where we were starting and how that would be a waste of Napa scenery. Zooma showed me.  The entire out-n-back course looked like this: 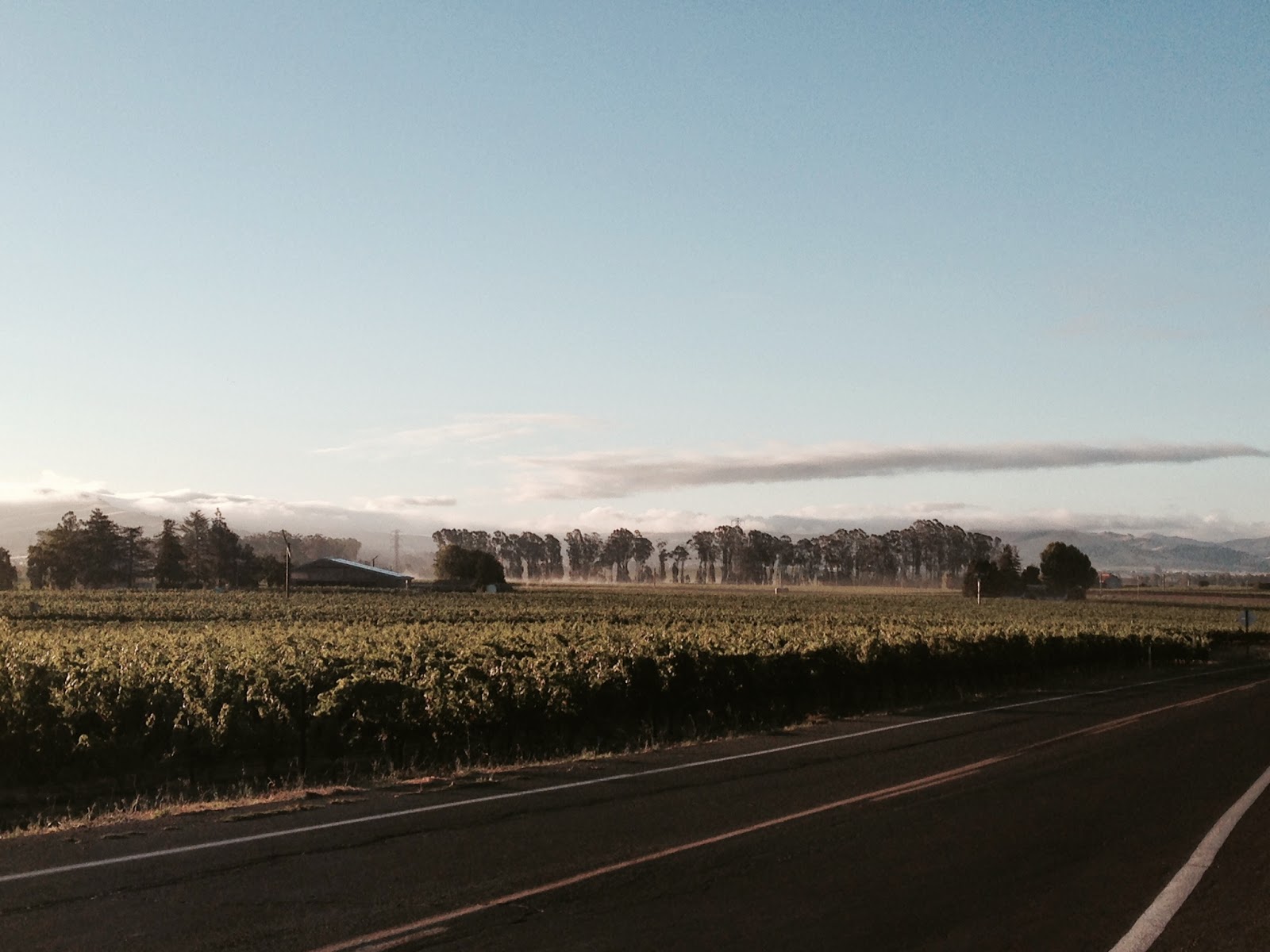 I should learn to keep my mouth shut and maybe start looking at course maps.  Just a thought. Besides the glorious scenery, this course was nice and flat.  For others this made for a fast course, just not of me.

When it comes to running, heat and I just don't agree.  When it comes to being in an ocean or lying by a pool, we're the best of friends.  Running in heat, I get even more flushed than normal, I swell, my entire face gets covered in a grainy mess of salt which gets in my eyes.  My breathing is even more difficult and I constantly feel like I have to pee.

I tried to take it easy and pace it out for the first few miles but I could feel myself pushing to try and bank time for the return trip when I knew it would be even hotter.  My dramatics are making it sound like it was 110 degrees, for the record it was only 85.

Right before the turnaround I stopped to use the porta and take a Gu.  I did not need to stop and use the bathroom but I was being super paranoid.  I felt really full even though I had been careful about my nutrition the night before and I "had" to pee.  I kept telling myself it was the heat and dehydration and I'd sweat it out but my stupid paranoia caused me to stop for a few unnecessary minutes.

That messed me up mentally.  I had been feeling strong except my stomach and once I got to the turnaround I knew I was right near an hour.  I started cursing the pit stop and doubting my ability to run the second half as fast as the first since it was warming up.  I ran with Amanda for a little bit and we chatted which helped distract me.  Once we separated though, the heat just took over.  I knew I could push really hard and maybe make it but I just didn't have it in me.

I should have tried harder but my mental strength wasn't there, except for Mile 13 apparently.  I didn't hit my goal of a sub 2-hour.  I was disappointed for about 30 seconds while I was chugging a Muscle Milk at the finish line and then I got over it.  I was running on tired legs, it wasn't ideal conditions (for me) and I made some rookie mistakes that I'll work on going forward.  Also I found out on Monday morning that I have a pretty nasty sinus infection so that didn't help with the breathing part either.

We headed to the finishers party at the Marriott and met with other ambassadors.  It seemed like everyone had similar experiences with the heat.  Up until this point, I had been impressed with Zooma but the after-party was where they really shined.  It was out in the courtyard with a pool, which many runners were soaking their legs in.  Wine tasting, good food, honest tea, a bloody mary bar (with bacon),  yoga, massages and a great space to just hang out, stretch and relax.  Ultimate post-race festivities.

Thanks Zooma for putting on an awesome race!  Rumor has it they will be back next year and if so I'll be there.  This race did get me excited for Napa To Sonoma next weekend.  Keys to making it a successful race and trying again for that sub 2: