I posted a pledge to run a marathon and then fell off the face of the earth.  Sounds about right.  In the last three weeks I have been traveling, working, running and traveling more.  As a quick catch up, I spent a week in Kauai with MFR, my parents and our close family friends.  We hiked, kayaked, golfed, even ran a bit, ate, drank and did a damn fine job of relaxing.  Pretty much the whole week looked like this: 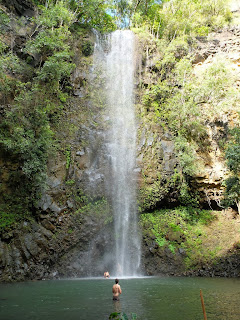 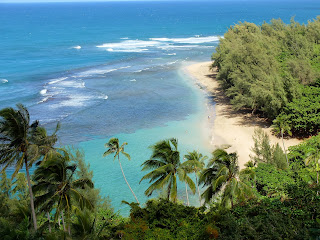 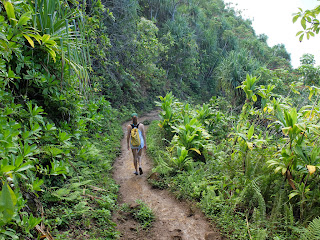 Last Thursday I arrived home from Kauai around noon and had just enough time to unpack, repack and shower before heading back to the airport to fly to Vegas and meet the girls for Ragnar Vegas Ultra.  This was not ideal as far as timing goes and I don't recommend this approach but since I can't say no to races or vacations then sacrafices must be made: sleep, laundry, sitting still etc....

I arrived in Vegas Thursday night to find the girls all ready to go.  They picked me up at the airport and the van had been decorated, the food had been purchased and everything was packed.  Basically I got all the glory and none of the work. Just how I like it.  As Leslie said, we're not sure who's idea an Ultra Relay was but at one point we all agreed to it and all of sudden it was here. I should mention that my teammates were all women from Portland who knew each other from PDX Tri Club, TNT etc...  Besides Leslie, I didn't really know anyone too well but they did not dissapoint.  I am counting down the days until I get to race with these ladies again.

Friday morning we were up before 6am and on the road, headed to  Lee Canyon Ski Resort.  It was very bizarre going from high 70's to freezing with snow on the ground in under an hour.  At 8am it was go time and Erica took off.

As Erica and Anne ran down the mountain, I started to prepare for my first run.  As you can guess I have been terrified for this event for many months.  I haven't been running the proper mileage for an Ultra (whatever that may be).  To date I wouldn't say I've ever had a great relay experience as far as the actual running goes.  I clearly love everything relay but something always goes wrong (stomach issues, altitude etc...) and I never really feel great about my actual running performance.  And that's with 12 runners.  Regardless I have always wanted to run an Ultra (6 runners) so why not now?  When legs were assigned, I picked Runner 3 since it looked easier then most and had nice even legs: 10, 9, 10.  Considering I don't usually run 30 miles in a week, I knew doing it in one day would be a challenge but I figured I could get through it.

Two weeks ago we received an e-mail from Ragnar stating that the course had been changed and so had some of the legs and distances.  Runner 3 was now running: 13, 13, 10 and my middle leg had gone from a rating of easy to very hard.  FML!  Two half marathons and a 10 miler in 24 hours?  I knew I'd have to dig deep to get through this.

Legs 5 & 6: 13.68 Miles
Around noon on Friday I started my first half marathon of the day.  It was out on Hwy. 95, the sun was beating down and it felt like a hair dryer was blowing directly on my face.  I knew it was going to be rough so I just tried to stay positive and not think about the many miles left to go.  Instead I concentrated on taking it easy and not burning out on the first leg.  I will say that it does feel pretty badass running through an exchange and saying "Ultra - Running Through."  I did not get sick of that all weekend and people give you major respect when they see you're running the Ultra.  After some very long hold ups at stop lights, I finally got to my handoff exchange with Garmin showing 13.68 for a total.  I was sweaty, hot and happy to be done. Nuun had a tent at this exchange which was awesome because I got to see HTC Coordinator extraordinaire Megan!  Nuun also hooked us up with bottles, stickers, van swag and of course Nuun.  All things that were pretty clutch at helping us survive this race.

Legs 17 & 18: 13.32 Miles
The weird thing with Ultra is how fast the whole thing goes.  With only 6 runners and one van, you never stop moving.  I felt like I had just started to relax when it was time for me to run again.  Around 7:30pm, Anne came into the exchange and off I went.  The sun was down and the temp had dropped to high 50's.  I really debated wearing long sleeves because I run hot but eventually decided to.  Thank god I made the right choice.  After 3 miles around town, I started the 10 mile climb out to Red Rock Canyon.
There was no van support on this leg and it was VERY dark.  The temperature kept dropping until my hands lost feeling.  In the end, the dark and cold is what got me through.  I couldn't see the hill I was running up and if it had been during the day and hot, I would have died.  I saw about 10 other runners but had mulitple mile stretches where I couldn't see anyone.  The mirage of the exchange (van lights) seemed to never get closer so I just put my head down and thought how lucky I was to be out here on a beautiful night.  Finally, after almost breaking my ankle on a cattle grate I handed off to Leslie.

I immediately tried to shove all the food in my mouth and get some sleep.  The first task I was very successful at, the second not so much.  We took turns driving, navigating and trying to stay awake.  At 5am the sun was coming up and it was time for my final leg.

Legs 29 & 30: 10.18 Miles
After some serious bitching about not wanting to run again and having too many miles (sorry ladies), I put my big girl pants on and got out of the van.  Anne came into the exchange, handed me the bracelet and I took off a bike path into the sunrise.  The first mile or two were ugly.  I kept stopping to walk and I couldn't catch my breath.  I was focusing on how much I had already run and was worried I just wouldn't be able to do it.  I realized this negative focus would make for a very long 10 miles.  I needed a plan.  I made a deal with myself that I would run for 2 min and walk for 1.  Running at all was tough at this point but I just kept saying, "you can do anything for 2 min."  It worked.  On all the flats and uphills I kept up this routine and on the downhills I would just let go and let gravity do it's thing.  My average ended up similar to my other legs and I even finished with a smile on my face.  I think I was also smiling because it was starting to really heat up and I was so thankful my run was over before the hair dryer came back on - sorry Leslie, Steph & Laura:(

So there you have it.  My first Ragnar and first Ultra done!  Considering I never ran more than 26.2, I was proud that I knocked out 37 miles in less than 24 hours.  I never thought I'd be able to run an Ultra but I did and even had fun.  Great way to finish out my 2013 race schedule.

Final stats: We finished in 30:13 and came in 2nd in the women's ultra division!

I am not as sore as I would have thought though stairs are a challenge.  I spent yesterday watching football and hanging out with my adorable nephew before flying home at the crack-o-dawn this morning.  I am looking forward to a few days recovery and relaxation before Napa Valley training officially begins next week.