The Good, The Bad, The Pledge

The Good:
I ran Nike Women's Half Marathon was this past weekend and I had a great time.  My legs were heavy and tired but I finished in 2:04:33 and felt good with that.  I got to spend the weekend with some awesome friends and teammates. A few pics to commemorate:

The Bad:
Remember that time I was going to run a marathon?  You don't?  Well there was that time in 2009 where I registered for Eugene Marathon and then switched to the half mid-race.  Then there was that time I registered for a marathon and then switched to the half pre-race.  Which time was that again? There was Vegas 2011, Long Beach 2012, Surf City 2013, Mountains To Beach 2013, Half-Moon  Bay 2013 and Nike Women's Marathon 2013.  Plus I am sure countless marathons that I never actually registered for.

I keep telling myself I want to run a sub 4:30 marathon.  But do I? Clearly it's not that important to me. It's been 3 years since I ran my last marathon and I've only ever ran two marathons total.  Compare that to 23 half-marathons, 12 triathlons, 7 relays...you get the idea. I could go back to each of those races and scrutinize where it went wrong but the truth is I already know.  It never started.  I never committed to the training or the race.  I didn't respect the distance and thought I could squeak by without putting in the work.  But the days of doing a marathon "just to finish" are over.  I am improving, I am getting faster and I want that to show when I finally do one.  I want to be proud of the outcome instead of just getting through. 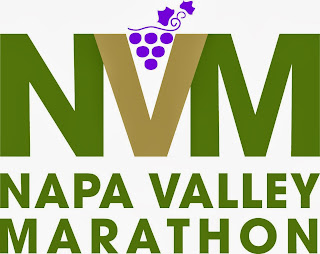 It's time to get this ass kicked into gear and make it a priority. FOR REAL.  I am doing the Napa Valley Marathon on March 2nd.  I am going to follow a 15 week training plan (following a week of recovery post Ragnar Vegas).  I am going to Sub - 4:30.  There is no option for a half with this race - that is not a coincidence.  It's time to Rise & Shine.
Posted by Bird Legs at Tuesday, October 22, 2013