Oh man where do I begin?  Cascade Lakes Relay (CLR) was everything I hoped for.  It was challenging, exhausting, ridiculous, exhilarating and hilarious.  Let's start with my team.  As previously stated I signed up for CLR with the same Hood to Coast team that I've run with the past 3 years.  I've co-captained every year with my good friend Dan who I've known since college. He was in MFR's fraternity and dating one of my roommates at the time.  We then worked at the same company for two years and have since, traveled, attended countless duck games and planned 4 years of relay races together, just to name a few.  We share a love of all things endurance, duck, beer, football and relay related.

Four years ago when we first put a team together it was a hodgepodge of co-workers (who worked at our old company) and college friends.  Since then people have come and gone and come back again and the team has taken in new additions of triathlete friends, friends spouses, friends of friends etc...  Somehow, we've managed to hold together a pretty core group and they keep coming back every year.  At least 7 of the teammates this year were on the original team.  This makes each year a blast.  We all know each other way too well and feel very comfortable being our inappropriate selves and making fun of each other for the entire 3+ days we're together.  Plus, there is always a lot of replayed stories and jokes, "remember last year when _____ threw up mid run after eating 5 Uncrustables?"

Needless to say organizing this motley crew can be a challenge.  Every year, I think Dan and I both question if it's really worth it and the team probably thinks the exact same thing when they receive our 1000th e-mail in two weeks.  But without fail, after the race is over, we all start talking about next year. This was no exception - If you're going to torture yourself for 30+ hours, do it with your best friends.

I am getting way ahead of myself.  Let's go back.... I flew into Bend, OR (ahhhhhh, my happy place) on Thursday afternoon and immediately started the dance of pick up vans, grocery shopping, check into the rental house etc....  Most of the team came in that night and we enjoyed an awesome dinner made by one of our gourmet chef teammates. For real, if you're thinking about putting together a team, I highly recommend recruiting someone who loves to cook for 12+ people.

4am on Friday morning came very early for those of us in van 1.  We packed up the van, had two sips of coffee, some breakfast and were out the door; leaving our bullhorn (non-stop entertainment) on the counter:(.  We drove the two hours from Bend to Diamond Lake and watched as the temperature dropped to 38 degrees.  This year they started the race right next to the lake and it was beautiful.  At 8am Jeff was off running.


After Jeff took off the race progressed as 200+ miles relays do and around 1pm it was my turn to run.

Leg 5: 8.74 Hard
It was relatively flat but I was still nervous for the altitude and the heat.  It was 80+ degrees at this point.  Those factors definitely played a negative role in my run but the real issue was what I was running on.  Per usual I didn't really look at my leg that closely nor did I notice it said something about "red cinder." You heard it hear first, red cinder sucks!  The ground was super uneven so everyone was running all over the road to try and find some flat ground. It was also the worlds longest straightaway with no change in scenery for almost 9 miles.  You'd be running on what you thought was finally some even terrain and then all of sudden it would turn to quicksand.  It was a major mindf***.  We also had the added bonus of the vans going by and kicking up dust the entire time so my lungs were on fire and my asthma was bad.

My legs felt okay and my pace wasn't terrible (though it wasn't great) but I just couldn't ever get into rhythm.  The entire 9 miles felt like that first 200ft. of a race where you're trying to figure out your pace and weave in and out of people.  The van stopped for me twice to give me water and could see I was hurting.  Everyone was trying to say nice things, like "this sucks but you're looking great."  Unfortunately I had already gone to the dark place and mentally was responding, "I look f'ing horrible and I just want this to be over."  I finally clicked off mile 8 and ran as fast as I could, which felt like running in place, to the exchange and handed off to Leslie.  Immediately afterward I chugged a gallon of water because I felt like I had a ball of dust just chilling in my throat.  I averaged 9:50's which was nowhere near what I had planned.  I was fairly defeated but I knew my hardest leg was over so I just concentrated on that.

After Leslie came in for our final leg of round one we headed to Silver Lake to get a little rest and food.  Pointer, if you are in Van 1 - definitely hit up the "sleeping area" in Silver Lake.  They had food, live music a massage tent etc... It was awesome.  Leslie and I convinced the firefighters to let us change behind the trucks in the fire station.  Then we all laid out in the grass, had pulled pork sandwiches, huckleberry smoothies (possibly the best smoothie I've ever had), stretched, rolled and listened to the music.

Around 7:30pm it was time for us to get going again and after a quick run in with the children-of-the-corn at the local gas station we headed to the next major exchange and waited for Van 2 to come in.  At this point the mosquitoes were in full effect so to make due I stalked the 10 Barrel van and got a few beers.  We also met the founders and I full on embarrassed myself by swooning over them like they were celebrities.  Which in my mind they are.  Jeff took off and once again the legs started ticking off one by one.  Sometime during this van ride we all decided we should look at the legs we were about to run in pitch black.  It appeared everyone was running on pavement or light gravel.  The light gravel was no picnic and the vans were churning up a lot of dust from the gravel so that at some points it looked like it was snowing.  I figured, at least it's got to be more even than that first leg.  Someone turns the page, "oh Kara yours actually say red cinder."  You've got to be kidding me!


Leg 17: 7.18 Hard
So at 2am I jumped out of the van and ran another 7 miles on that damn red cinder.  It actually wasn't as bad as the first leg because the vans before had flattened some of the road.  It was still tough though and I was all over the road and had to concentrate very hard on having my headlamp positioned right so I didn't hit a quicksand spot and break an ankle.  I felt like I was running at a pretty decent clip and was shocked to find 9:30's flashing on my Garmin.  I thought at least 9:00's.  Apparently sucking in the dust and barely breathing made me feel like I was running way faster then I actually was.  Oh well, I came into the exchange feeling much better and handed off to Leslie.  One not cool thing was that there were cattle grates you had to run over and they did have some plywood down but it was hard to see and way off to the left so you'd come flying up and then come to a complete stop to try and tip toe over the grate.  I had a few close calls.  One really cool thing is these night legs were patrolled by volunteers on horseback.  The volunteers and horses were decked in neon necklaces.  It was pretty awesome running towards them and thinking, "is that a spaceship, nope it's a giant horse wearing rave necklaces in the middle of nowhere."

We handed off to Van 2 and headed to La Pine for some much needed sleep.  La Pine was not as nice as the first stopover but they did have cots, showers and a pancake breakfast so it worked out great.  I think everyone got around 2 hours of sleep and then we were back on the road for Round 3. 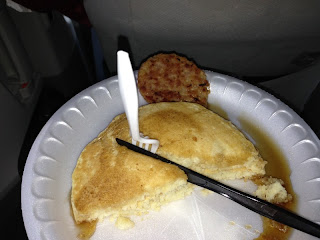 Around 7:30am Van 1 started running again.  Everyone took on their last legs (the real test of the relay) like champs.  Around 11:30 it was time for me to get running again.

Leg 3 - 2.09 Easy
Finally an easy, short leg!  I was so excited.  One minor detail, this was the costume leg.  Yep there is a costume contest - mid relay.  I told you CLR was awesome.  Naturally I ran in a beer costume.  It was extremely hot and did not breath at all but it was well worth two miles of discomfort.  Plus, it was only two miles.  I didn't even wear my watch because it was so short but I am assuming I ran around 9's.


Leslie came in around noon and then Dan crossed the finish line around 5pm.  We all celebrated with some amazing local brews and partied the night away.  And by "partied" I mean we all had two drinks, got in the hot tub and passed out by 9pm (or was it 8?).  Another successful year in the books.  Now the real question, which race do we gun for next year?