Rock N' Roll Review- The Making of A Rock Legend

Obviously as a medal-whore it was only just a matter of time before I dedicated a year of my life to the Rock N' Roll race series.  Unfortunately it also happened to be the same year I discovered the Beach Cities Challenge (and was told it was ending - false btw) so I had no choice of course I had to do both.

In the heavy medal world of RNR, starting with your 2nd race (in the same year) there is an additional medal for every race you do and sometimes a 3rd medal for doing two races in the same region (ex: Desert Double Down and Pacific Peaks).  I decided that 2012 was going to be my year and seven races was my goal.  I started by saying three or four but it's a vicious mind game of "well if I am already doing four, I might as well do five."  Basically they've got you by the balls feet.  You get another awesome medal for completing 10 but there isn't anything for eight or nine (which I think is ridiculous) so I settled on maxing out at Rock Legend.

My first RNR experience was Vegas 2011 and needless to say it wasn't great.  I've heard they made some improvements this year so it might be worth a revisit.  After the sub par Vegas experience I was a little turned off from the RNR franchise.  However, I had already signed up and bought my plane tickets for Arizona a few weeks later.  I figured I'd just get through that, get my Desert Double Down & Rock Encore Medals and call it good.  AZ was a much better experience and I PR'ed so I decided to give them a second chance and go back to the original plan of seven. In their ploy to take over the world, they are up to 27 races in the US to choose from.  These are the seven I chose ranked in order of preference. 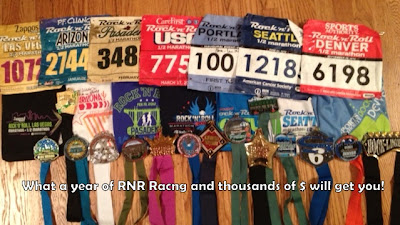 Overall I'd have to say it was a great experience.  Although the traveling got a little old; I really did have a good time at each race.  If you don't like crowded races then I don't recommend it.  The size, reputation and monopoly number of races RNR has can be good and bad.  The positives are the locations, well organized, entertainment along the course, a good after party and decent finish-line food. The medals and shirts are bomb!

The downside is the races are usually overcrowded; most of them are 20,000+.  Also once you've done a couple the sexiness sort of wears off.  The swag bag, expos and finish-lines start to get sort of monotonous and repetitive.

The real problem with my plan was I way over committed (see Beach Cities) to the number of races and traveling and it became much more about quantity then quality.  Except for AZ, I was under trained for every race and went in with a "eh who cares, I've got another one next month" attitude.  Because I had so many races on my calendar I just kept saying, "I'll kill it on the next one."  If I had taken the running more seriously instead of just getting through them, I would have enjoyed the races even more.  In the end I still think the races and medals are fun and if you're crazy enough to do it, it's a great excuse to see some awesome cities and hang with the celebs. 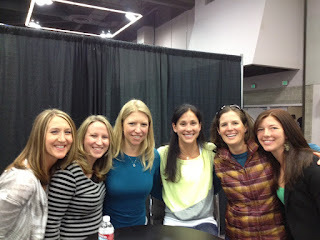 Next year it's about targeting some key races to PR and with a few exceptions I am hoping to stick with local (in CA) runs as much as possible so I can enjoy my new state. So thank you RNR for a fun 2012; it's a challenge that taught me a lot and gave me some great memories. And if it tells you anything I've already signed up for two RNR's next year: San Francisco and Portland.

If you're considering doing it, here are some tips I learned over the past year: 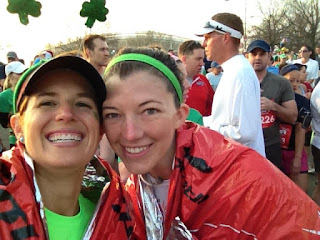 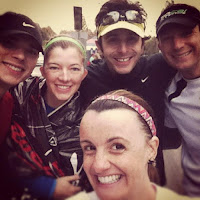