Rock N'Roll Las Vegas - December 4th
Oh boy where do I even begin? I have such a love/hate with this race. For starters I love Vegas - yep I am one of those. I lived there for two years when I was in high school. My brother, his fiance and my adorable nephew live there and I love it so much that MFR and I had our wedding there this year with over 100 of our closest friends who made the trip. I went there four times in 2011, so yeah I like Vegas! Not to mention this time there were six of us who made the trip, three couples. MFR and I, my bff Britt (also officiant of our wedding) and her husband Ian, and my partner in crime/endurance events Naughty Audy and her husband Jeremy (aka Jer Bear). With that motley crew it was a guaranteed great trip. We entertained ourselves for hours and did a great job of donating money to the great state of Nevada via The Sex and The City and Get Egg-cited slot machines.

The race however was definitely a disappointment. They were so unprepared for 44,000 people it was ridiculous. From the expo (which took two trams, multiple wrong hotels and wandering through parking garages to find) to gear check, to the corrals, to the course, to the finish line and the hotel space afterward, everything was over-crowded. They ran out of water, medals (thankfully not mine, I would have kicked some ass), GU's etc... The entire race you were zig-zagging around people and fighting for running space. After I (finally) crossed the finish line and was in the post race area it came to a complete stop. A girl right next to me collapsed and was having a seizure and medical couldn't get anywhere near her - it was horrible to watch. It took over two hours to find everyone in our group and get back to Monte Carlo where we were staying. Not to mention the whole night thing really threw off the eating/digesting issue all day and it was FREEZING before and after the race so it was a real guessing game for what to wear.

Now having said all that, I loved running on the strip and seeing all the entertainment. Had I not been pissed about the crowds and super dehydrated, I would have loved it. So if they put a cap on it next year and get a clearly marked marathon course, I'll definitely consider it. Otherwise I might have to add another RNR race to get my Rockstar medal! All in all I was disappointed with my first RNR experience but it was worth every moment of bitching, being freezing and wanting to kill all the other runners and the race organizers because check out the bling:

A few pointers, you don't need to fly in until Sat. especially for a Sunday night race and the Monte Carlo was awesome to stay at. It was cheap, nice, not too big and within walking distance of the race start. Plus the 24 hour food court came to our rescue multiple times.


Foot Traffic Holiday Half Portland - December 11th
I really enjoyed myself on this race and not just because I PR'ed. It was such a relief after Vegas the week before. It seemed like a nice, little, quaint local race. The race started and ended at Adidas and the course goes to St. John's Bridge (so PDX marathon backwards) around some parks and neighborhoods in NoPo and back. It was well supported and except the first few narrow streets it didn't seem too crowded. The course was flat and the holiday cheer was in full effect. Everyone was decked out in Christmas gear and there were carolers all throughout the course. It was awesome. Packet pick-up was a breeze and the tech shirts were super cute but I didn't get one because I was a slacker and signed up late. I did however wear my adorable Vegas shirt and got a few compliments on running two races on back to back weekends. Yes, that is exactly the reaction I was looking for when I planned my outfit. Look I am not fast so I take what I can get:) And yes I did look non-stop for skinnyrunner out on the course hoping that she would see my shirt and say something about how I am as hardcore as she is for doing those two races.  What? By the way, she didn't even end up doing the race so felt pretty lame.

This race really gave me hope for next year since I think without my eating breaks, stopping to talk with friends and quasi-celebrity stalking I could pull a sub two. But lets be honest, I'll probably always being doing those things:) The only reason I wouldn't do this race again is this: 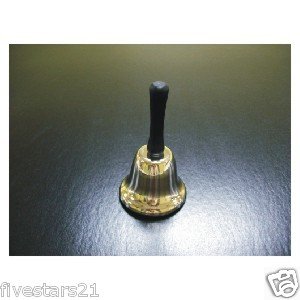 What the crap is that? I can't hang that with my other fancy medals. COME ON! Cheap handheld plastic bell with chipped writing? I think not. If they don't go back the adorable medals they had last year: 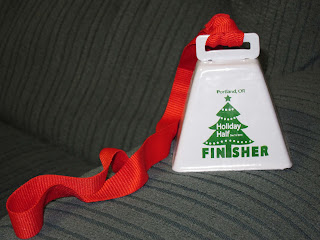