Ahhh….Hood to Coast! How I love thee! It really is the dumbest idea ever. Let’s get together 12 people and run 197 miles from Timberline to Seaside and we’ll make them ride in two vans where everyone is smelly and gross! Ready go. Having said that, HTC is one of my favorite weekends and events. Third only to St. Patrick’s Day and Brewfest!

This year was my second time doing HTC so I knew what to expect. However, this time I was in Van 1 and before I was in Van 2 so I feel like I’ve actually seen the race from both sides. Little secret: Van 1 is place to be! A few of us tried to get a team together this year but unfortunately we were not chosen. Soon after an e-mail was circulated saying that Shannon (who I met during Pac Crest 08) was looking for runners for her Ligers team so I responded ASAP and soon enough I was a Liger (it’s a lion and tiger mixed, bred for it’s skills in magic).

Fast forward a year to last Friday morning! At 4am I was awake. I showered, finished packing, made coffee and was out the door by 5:20am. Van 1 met at Shannon’s house around 5:45am and was on the road by 6am. The vans had been decorated the night before. 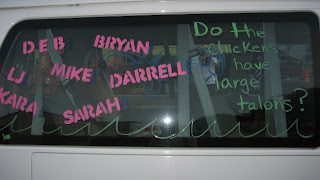 Shannon was in Van 2 so the only person I really knew in my van was Darrell who is also a TNT alumni. Of course everyone ended up being a blast and we were all laid back enough that we still liked each other at 2am in the middle of a field in Mist, OR with no sleep. After a quick stop to pick up Mike we headed up to Timberline. I will add here that our driver Deb kicked ass! She drove the entire time, never complained, got us to every hand-off point on time, helped keep our official time and re-routed us to Mist when we missed a turn at 1am while every else in the van was passed out.

We got up to Timberline 1.5 hours early but that gave us time to take in the gorgeous view and take some team pics! 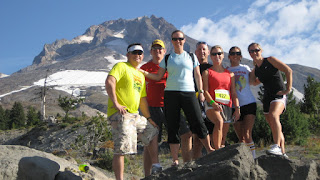 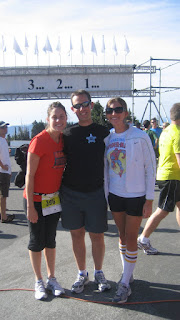 Lesley took off at 9:30am exactly and ran screaming down Mt. Hood. All of our legs went smoothly and before I knew it, it was time for my first run. This leg was my longest at 7.18 miles so I told myself to just get through this and the rest would be easier. Wrong! Either way I took off feeling good until I realized it was sweltering hot! What? It had literally just been a nice balmy, shady 70 degrees for everyone else and now I was in the direct sun for 7 miles without sunscreen. It was rough! Luckily my team realized the temperature had skyrocketed and stopped to hand me some water which I downed and poured over my head. I reached a mini hill and felt like I was barely moving once I saw the hand-off area I stepped it up. I came in, handed off the bracelet to Darrell and then started walking around trying not to vomit. I don’t do well in heat. I was mumbling and apologizing that I had lost our team time.

Finally my heat rate slowed down enough where I felt like I could climb in the van again. Mike checked the time and said I had actually come in within 30 seconds of my projected time. Yes!! This made me feel much better.

While Darrell ran, I cooled down, ate, drank and got my head back in the game. FYI…it cooled down again about 3 miles into Darrell’s run so the hot-streak was just for me:), and everyone else running that leg. In Sandy we handed off to Van 2 and battled traffic back to Sarah and Mike’s house in NE. Sarah (Mike’s wife, not the runner) had pizza, hot showers and beds waiting for us. It was amazing! After a few hours of rest, no actual sleep, at 6:30pm we headed over to Hawthorne Bridge. Van 2 came in right on time and Lesley took off running in her reflective vest. 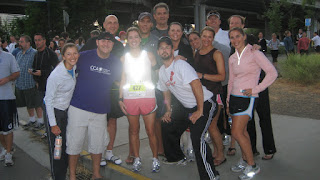 Again everyone ran well, we gassed up the van and around 11pm it was time for me to run again. I was geared up with my headlamp and reflective vest so I looked awesome. This was my shortest run, 3.52 miles and I actually felt great the entire time. I knew I was holding my pace and I passed a bunch of other runners. The headlamp slipped off so I ended up carrying it in my hand which I think irritated those running around me since my light was bouncing all over the place…oh well. It’s weird being out on Hwy. 30 in pitch black just going for a run but that’s what makes this race so much fun and so unique. I got to light at Fred Meyers in Scappoose and the volunteers said I had to wait for the light. “What, are you kidding me?” I sat there for what felt like forever but was probably only 60 seconds or so.

The volunteer told me the hand off was just across the street at the top of this small hill. So as soon as the light changed I took off sprinting up the hill! I got to the top and sure enough..no hand-off. I had to run further to the right and then into the actual parking lot of FM. I slowed down my running but the sprint had not done good things. I could see the hand off but I thought for sure I was going to vomit from the sprint so I stopped and grabbed on to a bush. I took a few deep breaths and told myself, if you’re gonna vomit do it when your not being timed. I lifted my head ran into the parking lot and handed Darrell the bracelet. Of course as soon as I got there, I felt fine! Mike told me I came in a minute under my projected time and was now known as the most consistent runner! I took that as a compliment. I may not be fast but I am consistent:)

After Darrell and Bryan ran, we handed off to Van 2 around midnight and drove to the next van transition area out in Mist, OR. This is where everyone in our van passed out and Deb navigated us along the crazy coastal highways for over an hour. We got to Mist around 2am and decided we had 3 hours to sleep before Van 1 would be coming in. This is where people start hating Hood to Coast. There is usually not enough room in the van for everyone to sleep plus it’s smelly and stuffy so you take your sleeping bag and pillow outside to sleep. However, you can’t really sleep because there are constantly vans coming in and out so you want to make sure you don’t get run over and everyone is yelling for their runners or trying to find the other van etc… I started inside the van laid out on a bench but I soon realized that I needed to stretch my legs all the way out to avoid cramping so I joined Bryan, Sarah and Deb outside on the tarp.

I went in and out of sleep while listening to runners and watching for headlights, I am sure I got all of 1.5 hours at the most. At 5:30am we got back into the van and drove a little closer to the hand-off point. Lesley rushed to get changed and out of her sleepy state and headed over the transition point while the rest of us curled up in the van. That’s when I heard Travis screaming, “LIGERS” over and over again. In my delirious state I knocked from the inside of the window to let him know where we were and it worked! He came over to make sure our runner was out there. The next couple runs were a blur as I was so tired but I knew I had to rally for my last run. I started to feel really sick from lack of food and sleep but I figured I could make it 4 miles. I was standing in line for the porta-pottys right before my run feeling really queasy when the woman in front of me turned around and she had fallen and her face was all bloody. That sent me over the edge and I ended up gagging/dry heaving in her face so I am sure that made her feel really good. I apologized for that inappropriateness…sorry!

I think around 8:30am, Sarah came flying in and I was off on my last run of 4 miles. It was a slight incline the entire time and my legs were screaming so this was my slowest leg by far but I still hammered it out. At one point a woman cruised passed me on an uphill and said “we’re almost there, you’re looking good”. In my head I responded, “thank you, you too”. In reality I raised my hand and said “humunanyeahaha.” She looked and me laughed and continued on her merry way. That’s when you know you’re tired when you can’t even formulate words. I ran into the hand-off area and nobody was there to meet me. I start turning in circles and sure enough Darrell is standing right next to me on the sidelines. He hadn’t seen me run right passed him. Once again as pattern shows I told Mike I was going to vomit but proceeded to make to the van just fine.


After Darrell and Bryan finished up in the pouring rain, Van 1 was done!! We celebrated at Big O’Saloon with beers and burgers at 9am. Then we headed to Seaside for a shower and to cross the finish line as a team. 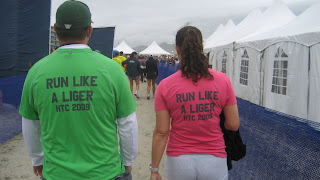 After a trip to the beer garden with my ladies it was off the beachhouse for dinner and in bed by 9pm where I slept for 12 hours! All in all it was a great time and everything ran smoothly. I could not have asked for a better team! Once again we are going to try to get a 2010 team together but if not then I know where to go! 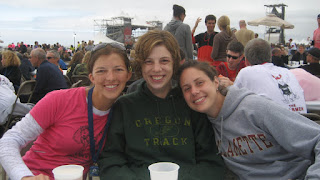 That’s just fine with me! That’s actually faster then I normally run…yes I am slow so I am pretty happy with those times. What a great weekend! I can’t wait to do it again next year.

You will not vomit after every run even though it doesn’t feel that way
One beer post Hood to Coast is enough to make you want to sleep for days
Having a driver is the only way to do HTC
Watching Darrell sleep with a dogbed (that he thought was a sleeping bag) over his torso and a towel over his legs is hilarious at 3am
Don’t expect to sleep for 36 hours when doing HTC
I roadkilled (passed) more people then I was roadkilled by…Success!! Also not the case last time I did HTC.
Don’t try speaking during leg 3
Ziploc bags, baby wipes and Orgins Fresh Legs do a van good
Team shirts and decorated vans are a neccessity