Well it's over a week later and I have already done another race since then, but before I get all triathlon/Wildflower lovefesty on here, I want to make sure I get a review up for this race.  As I said previously I had such an amazing weekend in DC!  Well played Nike on your first race outside SF.  I had a great time at the race and everywhere in between.   I know that technically men can run in the Nike Women's Series but there is no better way to do one of these runs then with a group of girlfriends.  If you're thinking about doing SF or DC, recruit some of your running besties and make a girls weekend out of it!  Both cities are very conducive to a long weekend with the ladies.

I flew in on Friday evening and met the girls in Georgetown for dinner.  I've been to DC at least five times now and I'd never been to G-Town.  I had no idea what I was missing.  Great food, great shopping and just about the cutest neighborhood you've ever seen.  On Saturday we did a quick walk by the White House to say good morning to Michelle and then went back to G-Town for the expotique. There was a massive line for registration but it went really fast.  Nothing too special in the swag bag.  We did a quick run through the expo because it was really crowded and I stopped  by the Nuun booth to say hi and introduce myself as a HTC runner.  Nike does a great job of stepping up your typical tradeshow feel of an expo.  It's a much nicer design and feels very woman-centric which I like.  In summary - it's just prettier:)  I did think it was a little bizarre that you couldn't actually purchase products there but that was probably a good thing for me.

Afterwards we ate, shopped, did some damage at Niketown (which was also insanely crowded), found our names on the wall, ate, shopped some more and then ate again.  I am pretty sure we easily walked 4+ miles that day.  Tiring out my legs pre-race is quickly becoming a tradition.  After searching the city for a bagel and settling for Cheerios we called it a night.  Actually we stayed up way too late watching the White House Correspondents Dinner and deciding if it would be inappropriate to go stalk celebrities in our pajamas. The jury is still out but we settled for bed instead.

At 4am I was up drinking coffee and prepping and by 6am we were out the door.  We walked to the start (getting a hotel in walking distance is a game changer for all races) and were in our respective corrals with plenty of time.  Nobody gear-checked but it appeared to be running smoothly.  At 7am we were off and besides the first couple miles being crowded the rest was smooth sailing.  It was 60 degrees out and not too humid which is just about perfect! My only complaint was the bathroom situation.  Luckily I didn't end up having to use them but I thought I might so I was on the look out and there were very few (both at the start and on the course).  There were a few porta potties at mile 1 and about 70 women waiting to use them:(  I heard feekback that people had to wait 20 min + to the use the bathroom during the race.  That is not going to make for a PR.  Otherwise course support and cheering was great!  I ran with my own "food" and just used the aid stations for Nuun and water.

As I said I was in the zone so I don't really remember the course except for it being flat and fast.  I know there were a few out and backs and we were along the Potomac for a large chunk of the race. I think we passed some monuments that I did not notice at the time.  The climb up to the Capitol during mile 12 was really pretty but seemed to be never ending because it was mile 12.


Finally, the finish line came into view and I had a PR to celebrate.  Per usual the red carpet, hot man in a tux and little blue box were waiting for me.  This is why women love the Nike races and it was no different this time around. Otherwise, the finish line food was pretty standard but they did give you a Tiffany & Co. blue bag to carry everything in.  They also had a big merch tent, stretching studio and a make-over booth (I am not sure how that works when you're pouring sweat and smell like death but people seemed to be using it).  I avoided all of those lines, grabbed my space blanket and headed out to stretch in the sun and meet everyone else.  Another great race in the books. 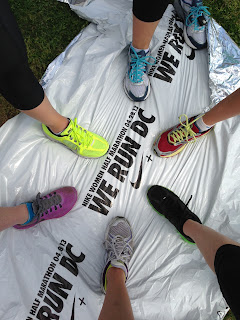 The rest of the weekend was spent eating, sightseeing and celebrating.  All in all it was a great race and a fabulous weekend with a great group of friends.  Can't wait to do it again next year!


Random Note:
I've gone back to look at my race reviews and I've realized that almost all of them have the theme of, "great time, great race, so much fun, you should totally do it etc...."  I can see how some people might view this as not being selective of my races or in-depth about the details.  But it's just who I am. I am a positive person who looks at the good.  I love running/racing and I always have a great time doing it.  Also I know going into a race now what to expect.  I've done small and large races and I appreciate both of them for different reasons.  And these days there are races for everyone so do your research and find one that fits what you're looking for.

The logistics of putting on a race is no small feat, especially when you get into the 10,000 runners + territory.  So if it's a little crowded or I have to wait for a train or car to go by instead of risking my life, I am okay with that.  It blows me away that after I complete a race, all I can think of is how much fun it was. Then I get on the FB page and see hundreds of complaints about the smallest details; ex: "my wave was supposed to cross the start at 7:05 and we didn't start until 7:07." Who cares?  That's what a chip is for.  So if you're looking for reviews with the negative gripes about every little detail, this is not the place where you're going to find it.  I'll definitely give you the reality of the race and the general overhaul (crowded, crazy traffic - plan ahead etc...) but most the time I had a great experience and that will come across in my review.  I enjoy races way too much to focus on the small minutia details of why they weren't perfect.
Posted by Bird Legs at Monday, May 06, 2013