Where have you been?

Well I haven't been blogging that's for sure!  I think last week was the first non-post week since the new year.  It was bound to happen at some point and last two weeks were pretty non-existent in the workout department.  That whole right calf thing I was complaining about post Surf-City got to the point where I was limping my way around the city.  Pathetic? Yes.  Scared that this is what I get for signing up for a marathon in 14 weeks? YES!

So I took the entire week off after Surf City and just rested and iced the crap out of my leg.  Good news is it appeared to work.  I got back on the horse with two 5 mile runs last week and a spin class.  I had a little soreness again on Friday so I decided to forgo my "long" run this weekend and just did a lot of walking, stretching and yoga.  For now everything appears to be in working order again and I am going to see how a 5 miler on the treadmill feels tonight and then try to run 8 on Thursday, here's hoping.

In other news, I received notification that a group of girlfriends and I got into Nike Women's Half in DC. 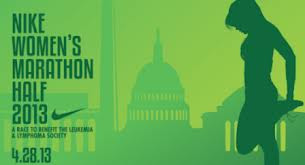 We entered the lottery assuming we wouldn't get in and sure enough we didn't.  We then tried to get the hook up from a friend of a friend of a Nike employee.  After a few months I wrote off the race and spent the money that would have been used on registration and plane tickets (oops!).  Imagine my surprise when we got the "hey you're in" e-mail two weeks ago.  So needless to say our girls race weekend in DC is back on the calendar.  I am excited to be participating in the inaugural event and although it's not my first choice of places to travel for a race (been there, done that), the company will be worth it and I am sure Nike will put on a fun and sassy event per usual.  This will also be my 20th half marathon which is kinda cool.  Did I also mention it's the weekend before Wildflower, three weeks before Portland RNR and four weeks before the marathon? So there's that.  I guess it's a good thing I don't have any races in March and only one in April since May is going to be a sh** show.

In non-running and completely random news, a few of my Oregon girlfriends flew down last weekend and we had a blast playing tourist and eating and drinking our way through SF.  My parents were here last night and we went to Leopold's German Restaurant.   The food and atmosphere were both fantastic but the real reason to go is this: 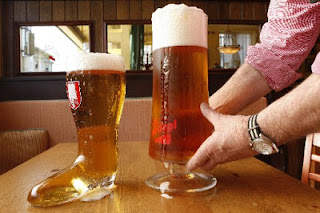 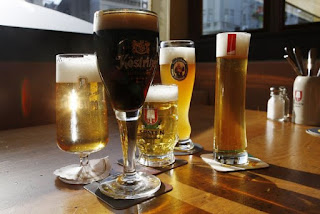 Their beer menu is three times the size of their food menu.  If you like German beer then welcome to heaven; I had a dark Hef that was as good as any of the beers I had when I was actually in Germany. They don't take reservations but it's worth the wait! And no I didn't have the boot or the bigger-than-the boot but it's been noted as a future project to take on.
Posted by Bird Legs at Tuesday, February 19, 2013