This race was a last minute addition and I once again didn't think I'd PR or that I was prepared (i.e. I drank multiple delicious beers the night before the race, I am who I am).  I've never really done a local small race like this before.  Ever since I've started endurance events, I've been drawn to the large, overt-the-top, sexy, way too many people, fancy medal races and if I get to fly somewhere sunny to participate even better!  So when Britt mentioned she wanted to get in one more race in the first quarter before moving to Amsterdam (I know, right?) and suggested Lincoln City in March, I was less then excited.

First off, I really do not like the Oregon Coast.  I am a SoCal'er at heart in my own head and to me the beach should be sunny and I should be able to get in the water without fearing hypothermia and Great White sharks.  Secondly, the race didn't even have a website so I was very skeptical.  And finally it was the first weekend in March which almost guaranteed freezing rain!  In the end I agreed because I love my friends, I have a race addiction and I suffer from a severe case of FOMO (fear of missing out).  Of course, as with everything I was dead wrong and the race was fantastic.

The small race made everything so easy!  There were 250 people doing the half and we parked right next to the start/finish.  There were no massive lines for the bathroom, the post-race food was the best I've ever had and we even got medals.  The course itself was gorgeous but very hilly.  The run went along a fresh water stream and "country" roads.  The two complaints I would have is they didn't mention the gravel road piece (at least 5 miles on gravel) and we didn't have timing chips.  Everyone starts at the same time and then they scan your bib after you cross the finish line.  So my watch actually said 1:59:40 and let me tell you if they had not given me a Sub-2 they would have seen the wrath.

It was a gorgeous day.  Sunny and 60's the entire day and the race didn't start until 9am...loved that!  More races should start later in the day; it's just not necessary to be up drinking coffee at 4am for a race start.  Anywho, all six of us in our group broke two hours (on a hilly gravel course mind you) and PR'ed.  Audrey killed it with a 1:55 so now I have to get way faster to beat her and Britt came in at 1:58 so I am still the slowest halfer in our group but with a Sub 2 in the books, I'll take it!  It was a great race and a great day.  I am not even mentioning Mrs. Bliss or the boys because they are fast... 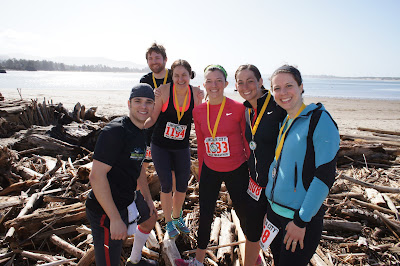