Yep I have officially lost my mind! I signed up for an Ironman. Mark your calendars folks, June 27, 2010 I will become an Ironman. I did the easy part, drove to Coeur D’Alene, volunteered, shelled out $500 bucks and signed up. Now the hard part. A year of training:) This will definitely be the most challenging and rewarding thing I have ever done. I am already nervous, excited, terrified and anxious and the race is 11 months away.

First off, I have been thinking about doing this since Oct. of 2008 and I’ve gone back and forth a million times. I kept thinking that I wasn’t ready, I haven’t even had a successful half-iron yet and the training is just too intense. On the flip side I realized that if I was going to do it, 2010 just might be my year. 2011 wouldn’t work because of Session, my job has to be my top priority during that time and we spend lots of early mornings and late nights working which does make for a good training schedule.

Therefore if I didn’t do 2010, I was looking at 2012 at the earliest. Who knows where my life will be in 2012…I mean I’ll be 30…WEIRD. Any-who, I still wasn’t convinced but then I found out there was a huge group of TNT Alumni planning on signing up for CDA 2010 so I would have an awesome group of people to train with during the cold winter months. On top of that, Natalie, Todd, Pete and Nat’s dad (who’s 60 btw) also were planning on signing up. Therefore I have a whole other team (So Cal Collective) to be a part of and race with. So the support is endless and how much fun would it be to do a Ironman with my best friend?

Even the week before heading to CDA, I still wasn’t 100% sure either way. It was endless talks with Todd about the time, money and commitment it will take. I still don’t think he’s really on board but he’s getting there:) He thinks it’s a stupid idea for anyone to do any Ironman nonetheless his live-in girlfriend but he gets why I want to do it and that my need to complete one is not going away anytime soon. I knew I had to decide prior to leaving Portland because if I hadn’t made up my mind, watching one will always make you want to do one and I didn’t want that to be the deciding factor. So I officially decided probably around June 18th that Yes I was going to sign up to do an Ironman.

June 20th, my dad and I drove from Portland to CDA and met up with the Webers & Pete. Pete is one of Natalies good friends who I had the pleasure of meeting in Florida when Pete, Nat, Todd (Nat’s boyfriend) and others did IM Florida in Oct. 2008. We went out to a brewpub on Sat. night and saw the adorable town that is Coeur D’Alene, ID. Sunday morning rolled around and we were up at the crack of dawn to watch the swim start. Two things to note, it was cold and the water was really choppy but the lake is beautiful. All day we watched portions of the race and volunteered catching people at the finish line. Natalie and I worked together since we were too small to “catch” some of the finishers on our own. When I say catch, I mean literally people cross the finish line and collapse and you have to be there to catch them and walk them to the medical tent or food area etc… The cool part was we were standing right at the finish line when the winners crossed, it was awesome. 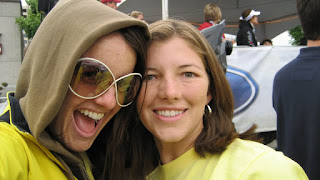 After a quick break for showering and Fathers Day dinner we all went back to the finish line at 10pm to watch the last people come in. You have to cross the finish line before midnight (17 hours) in order to be called an official Ironman. One woman came in with like 2 min to spare. Once again I will say, if you ever have the opportunity to watch an Ironman in person, do it! Monday morning we woke up early again and went down to the race site to sign up for 2010! It’s gonna be a great year. 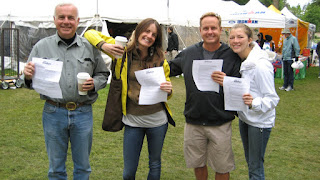 If you want to see a great look at what IM CDA is like, watch this video: http://www.ironmancenter.com/index.php?dir=RaceVids/imcda&vidname=RaceVid-2009-CDA-high&playtype=mov&w=480&h=400

You can even see Nat and I cheering the last runner in on the left hand side at the end of the film.